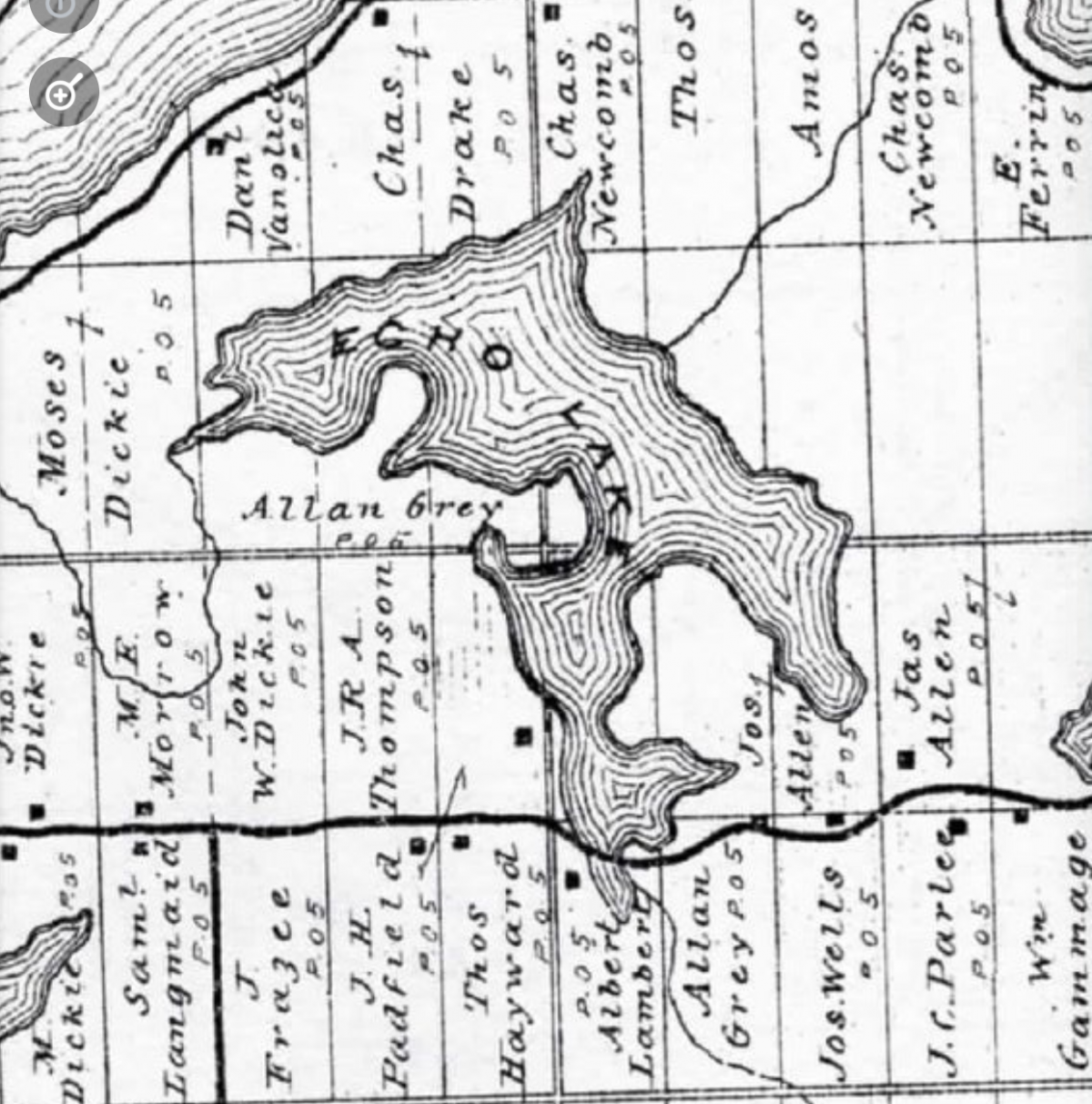 ECHOES OF THE PAST - A HISTORY OF ECHO LAKE
by Wendy Truscott
​
According to an early surveyor’s notes, there are seven locations on Echo Lake where a clear echo may be heard.  Generations of children have enjoyed shouting into them and anticipating the response.

Echo Creek begins beyond Ril Lake, enters the north shore of Echo, and flows out under the small cement bridge on the eastern shore.  At that point, it becomes the Kampakwagog River, which joins the South Muskoka near Fraserburg.  At one time, the lumber camps drove logs down it to Grass Lake, which is really just a widening of the river, and on to the South Muskoka.

Most of the original parcels of land belonged to Allan Grey, and other familiar names like Dickie, Brown, and Allen.  The two most well-known families were the Hammonds and Tyrrells, who farmed on the lake, and who are distantly related.  They owned most of the land later bought by cottagers.  While there are no more Tyrells on the lake, John (Jack) Hammond IV still lives there with his son, John V, and his family.

The original settlers who had claimed this section of land were the Allens, of Allen Lake, just east of Echo Lake.  They sold it to Steeles, and it came into the Hammond family as Jack’s grandfather, as well as a great-uncle, Wesley Hammond, both married Steele daughters.  Wesley is the ancestor of the Hammond family in Baysville, and there are Steeles in Huntsville, who are descended from the Echo Lake Steeles.

In the late 1800s, the first Jack Hammond in this family homesteaded on Hwy. 117, and his property extended all the way back to Echo Lake.  In 1929, he sold a lot on the lake to the Denton family of Toronto, who thus became the first to buy cottage property.

Percy Tyrell’s family farmed near Dorset.  He married Effie Eheler, of Baysville, and they built their first home on Old Wagon Rd., on a hill overlooking the lake.  It was still very much a pioneer life in those days; Hammond and Tyrell men were involved in logging and some farming.  Effie Tyrell often drove a horse and cutter to take her children, Olive and Pat, and others, to school in Baysville.

One winter night in 1933-34, the Tyrell’s house burned down, and the Hammonds took in the family until spring, when a new home was built at the NE corner of Hammond Rd. and Ril Lake Rd.  A barn for the cows sat on the SE corner, on the far side of the little river.  During the 1950s and 1960s, cottagers from Echo and Ril Lakes looked forward to stopping to buy Effie Tyrell’s milk and butter, fresh vegetables, unforgettably delicious home-made bread, and the occasional pie.  Her home was a landmark, where there was always a warm welcome, but sadly, in the late ‘60s (or early ‘70s) this house also burned.

Further along the lakeshore, Jack Hammond’s father and his Scottish wife, Agnes, opened a little store called “Uncle Jack’s Hangout”, where children could spend their pennies on candy, while their parents bought the daily paper.  It is still missed by those who fondly remember it.

The Tyrell’s daughter, Olive, married Reg Burk of Dorset and raised her children, Alan, Marilyn, and Glen, there.  After his parents’ deaths, Pat Tyrell lived in their home, until the fire.  Effie Tyrell had a sister, Ruby, whose children, Ruth Tucker and John Wheeler, live on Dickie Lake.  John’s wife, Doreen, is the daughter of Alice and the late Hap Watson of Baysville.

During the Great Depression, Alfred Winder and his wife, Louise Langmaid, both from Baysville, aquired most of the land on what is now called Winder’s Bay, the western part of Echo Lake.  Much later they subdivided it, and their daughter, Vera, and her husband, Harold Moon, built the first cottage on the bay.  It is still there on a small point of land facing directly east across the bay.  Vera, and brothers Harry and John, were all raised in Baysville, and Dr.John Winder still cottages on the south shore of the bay named for his family.  The Davis and Robson families are two of the early cottage families who remain on Echo Lake.  They built in 1947 and 1948.  The writer’s family, Lawsons, built in 1953 on land bought from Tyrells.

Roads around the lake were recently formally named for original families and cottagers:  Hammond Rd., Winder’s Bay Rd., McCabe Rd. (McCabes sold cottage lots on land bought from Hammonds), Lawson Rd, Truscott Place, and Olde Waggon Rd. (sometimes "Old Wagon Rd.") which led to the former lumber camps.  Lawson Rd had become widely known as Lawson’s Cottages Road, because the Lawson family at one time rented cottages there.  These Lawsons were from Toronto and not related to the Baysville Lawsons.  Lawson Rd. was named for Lawson descendants who opened up new lots and had the road built.

Happily, Echo Lake remains the lovely, peaceful paradise that generations of fortunate people have enjoyed.  May it always be so.

Profound thanks to “the fourth Jack Hammond”, who has a very sharp memory of history and events and graciously shared them.  A more detailed telling of the Echo Lake story will soon be available for interested cottagers.

Sadly, since this history was written, Jack Hammond has passed away, as has John Wheeler of Dickie Lake.  Dr. Winder has sold his cottage on Winder’s Bay.
Early Cottaging Adventures on Echo Lake

It wasn't quite the dinosaur age, but it sounds like it to my grandchildren.  It is the story of many older cottagers in Muskoka. In 1953, my parents, Bea and Jim Lawson, bought a parcel of land from Percy and Effie Tyrrell, farmers on Echo Lake, and our own pioneering adventure began.

With no road in, we blazed a trail, which means using an axe to mark trees so as not to get lost, and carried supplies about a mile in for a couple of years.  While Dad and Mom cleared the land, we rented a tiny log cabin from the Tyrrells.  Big chunks of mortar were missing from between the logs, and we fought biting insects all night long.  A boat-builder in Baysville sold us a small rowboat and, with the purchase of a 5 hp motor, eventually building supplies were rafted to the site.  Once the shell of the cottage was up, we camped inside it.

The long drive from Toronto wound through Gravenhurst and Bracebridge, and next you tackled the very twisty Hwy. 117, (then Hwy. 118 ) which has since been straightened out considerably.  This necessitated Gravol for my sister and me.  In Baysville, the three general stores stayed open late for any supplies cottagers might need.  At McCormick's these could be anything:  gas, milk, an axe, meat, nails.  If you needed it, Gord McCormick had it.

Arriving after dark, we parked where what is now Lawson Rd. ended in those days, and hiked in the blazed trail using flashlights.  Mom cooked on a camp stove, and oil lamps provided light.  Toast was often made over a campfire using a metal frame to hold the bread and popcorn was made in a long handled metal box which had to be constantly shaken.  You really had to keep a watchful eye on both.

Dad was the original recycler and installed used windows and doors.  He brought old rubber mats from the printing presses at work to use for subflooring, and he built a picture window of used glass panes from the lithographing process!  People gave us their unwanted dishes and furniture.  Mom made a warm quilt out of old suits.  It seemed the only thing new was the lumber.  Since an outhouse was an new concept to us kids, Mom kept us supplied with prunes to make sure we used it!

With no electricity, nightly entertainment was a game of Rummoli or reading by the lanterns.  Daytime entertainment was something you had to invent for yourself, but with half a lake to ourselves, it was usually exploring, swimming, or swatting flies and scratching bites.  Dad put us to work a lot, too.  When we were a few years older, we walked to Baysville for a treat of a bottle of pop or an ice-cream.  Along the way, there was a pure, refreshing stream of water on Muskoka 51.  Mrs. Tyrrell sold a few vegetables, homemade bread and unpasteurized milk to cottagers.  Although Dad loved her buttermilk, Mom wouldn't let us drink unpasteurized milk.

We bathed in the lake, and morning wash-up was in a basin on a stump with cold lake water.  After a few years, the four of us had cleared a very rough road in all by ourselves, and upgraded to propane gas lights and oil stoves for heat.  Such luxury.  It was many more years before we had electricity and hot water wasn't installed until the '70s.  For refrigeration, we bought blocks of ice from Findlay's Store (now the general store) and Dad put his back out many times carrying it in.  This was a problem because Mom didn't drive, and we'd be stuck for awhile until Dad recovered.

No one had a phone on the lake, and once, Mom, we two girls, a friend and her mother spent Monday to Friday alone at the cottage with no car.  During that time, my sister got a bad cut from a clam shell, but we just dealt with it as best we could because there was no car and no way to call for help.  Our nearest neighbours, if they were up, were about a mile away.

In rare emergencies, like a death in the family, we were notified by the arrival of the O.P.P.  With no civic addresses or road names in those days, people were not easily located, which was a big attraction for some but an inconvenience for others.  However, when telephone poles arrived on our road, many considered them a blight on our beautiful Muskokan landscape (telecommunications towers anyone?) and I was disappointed when we got lot numbers in the 1960s, as it felt like an intrusion of city life.  Now , almost sixty years later, I admit to enjoying my creature comforts at the cottage.  But sometimes, a nostalgic memory creeps in of our pioneering adventure.  Although it has become our permanent home, I still call it the cottage, because to me, cottage is a frame of mind.